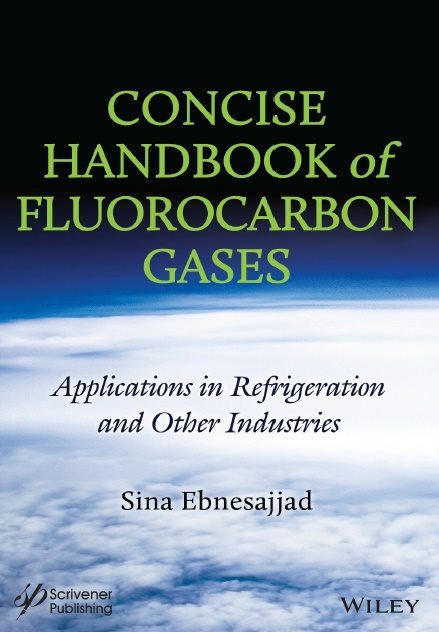 This book describes fluorocarbons gases’ preparation process, properties, applications and their evolution over time.  The impact of fluorocarbons on the ozone layer and global and the development to mitigate those effects have been specially emphasized.

The first major industrial fluorinated compound was developed in the 1920’s, to replace ammonia and sulfur dioxide refrigerants, at the General Motors Frigidaire Division by Thomas Midgley, Jr. and Albert Leon Henne.  They developed a family of fluorocarbons trademarked Freon® for auto air conditioning units revolutionizing the auto industry.  Other applications were developed over time including fire extinguishers, propellants, blowing agents, cleaners, anesthesia, artificial blood and others impacting every facet of life.

In spite of being in broad global use for nearly a century, fluorocarbon gases have gone through great evolution during the last few decades.  In the 1980s it was discovered chlorofluorocarbon (CFC) gases are harmful to the ozone layer, mainly because of their chlorine content.  Chlorine was released in the upper atmosphere when chlorofluorocarbon molecules were broken down by the high energy cosmic radiation. CFCs were progressively banned following the Montreal Protocol of 1987.

CFCs were replaced by fluorinated gases containing either less chlorine (hydrofluoro-chlorocarbons, or HCFCs), which are much less damaging (about 90% less) to the ozone layer or with fluorinated gases containing no chlorine, i.e. hydrofluorocarbons or HFCs. HFC have no impact on the ozone layer but impact global warming detrimentally.  HFCs are usable without need for changes to the existing refrigeration or air conditioning installations.  More recently hydrofluoroolefins (HFOs), which have little or no negative impact on global warming, have been developed to replace or reduce the use of HFCs.HFOs are used as single compounds or in blends. Research and development continues to develop and replace the HCFCs and HFCs completely with environmentally friendly products.

Concise Handbook of Fluorocarbon Gases presents a reference and text for the commercial fluorocarbon gases which have great many application in a wide range of industries such as refrigeration and air conditioning, as well as consumer products.