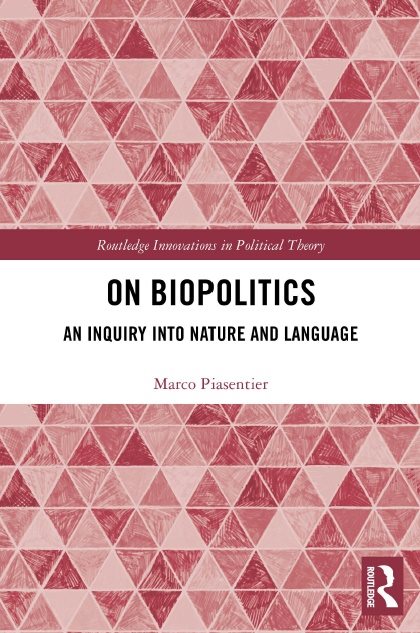 On Biopolitics: An Inquiry into Nature and Language

In On Biopolitics, Marco Piasentier discusses one of the most persistent questions in biopolitical theory – the divide between nature and language – and attempts to redraw the conceptual map which has traditionally defined the permissible paths to address this question.

Taking his cue from Foucault’s exhortation to think philologically and biologically, Piasentier traverses the main theoretical and methodological frameworks which have informed the biopolitical debate on nature and language, biology and politics. Biopolitical theory becomes the center of gravity for an investigation encompassing diverse philosophical models, from the Heideggerian linguistic turn to post-Darwinian naturalism. The divide between traditions is not proof of an impossible encounter, but constitutes the site for a new conceptual topography. Working in this interdisciplinary space, Piasentier puts into question the command of language and the ends of nature: two vestiges of a ‘human, all too human’ worldview that preclude the possibility of thinking philologically and biologically about biopolitics.

On Biopolitics: An Inquiry into Nature and Language is essential reading for humanities and social sciences scholars with an interest in moving beyond debates about nature and language.