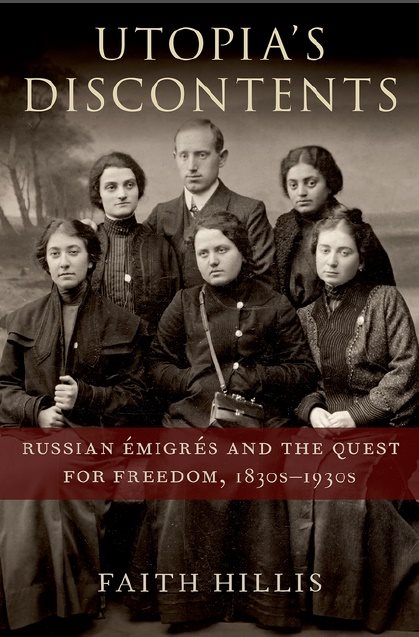 Utopia’s Discontents: Russian Émigrés and the Quest for Freedom, 1830s-1930s

In April 1917, Lenin arrived at Petrograd's Finland Station and set foot on Russian soil for the first time in over a decade. For most of the past seventeen years, the Bolshevik leader had lived in exile, moving between Europe's many "Russian colonies"--large and politically active communities of émigrés in London, Paris, and Geneva, among other cities. Thousands of fellow exiles who followed Lenin on his eastward trek in 1917 were in a similar predicament. The returnees plunged themselves into politics, competing to shape the future of a vast country recently liberated from tsarist rule. Yet these activists had been absent from their homeland for so long that their ideas reflected the Russia imagined by residents of the faraway colonies as much as they did events on the ground. The 1917 revolution marked the dawn of a new day in Russian politics, but it also represented the continuation of decades-long conversations that had begun in emigration and were exported back to Russia.

Faith Hillis examines how émigré communities evolved into revolutionary social experiments in the heart of bourgeois cities. Feminists, nationalist activists, and Jewish intellectuals seeking to liberate and uplift populations oppressed by the tsarist regime treated the colonies as utopian communities, creating new networks, institutions, and cultural practices that reflected their values and realized the ideal world of the future in the present. The colonies also influenced their European host societies, informing international debates about the meaning of freedom on both the left and the right. Émigrés' efforts to transform the world played crucial roles in the articulation of socialism, liberalism, anarchism, and Zionism across borders. But they also produced unexpected--and explosive--discontents that defined the course of twentieth-century history.

This groundbreaking transnational work demonstrates the indelible marks the Russian colonies left on European politics, legal cultures, and social practices, while underscoring their role during a pivotal period of Russian history.